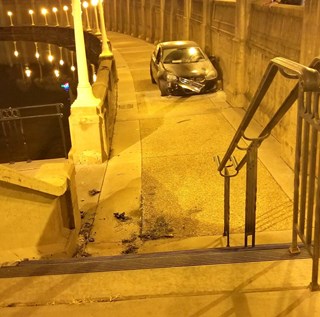 On June 30, 2017, at approximately 2:27 a.m., the Lakeland Police Department responded to 740 East Main Street in reference to a witness saying they observed a vehicle driving around the pedestrian walkway on Lake Mirror. This is not a designated roadway and was designed for pedestrian traffic only.

The driver, Derek Whiting, 25 years old of Lakeland was driving a Volkswagon Jetta west on East Main Street approaching the intersection of Lake Avenue. Whiting traveled through the intersection, left the roadway traveling onto the sidewalk, and struck a concrete sphere at the entrance to the Lake Mirror Promenade.

Whiting then traveled down the grass leaving the scene and proceeded west around the lake on the walking path, past the loggia to the steps. Whiting tried to drive up the steps to no avail. The first responding officer saw debris where Whiting left the roadway and the heard a loud crashing noise. The officer observed Whiting attempting to drive his Jetta up the stairs.

Responding officers located Whiting in the vehicle still trying to go up the stairs. Whiting was taken into custody after officers smelled a strong odor of an alcoholic beverage on his breath. Whiting was also unsteady on his feet and swayed while standing. Whiting was arrested for Driving Under the Influence, DUI with Property damage and Leaving the Scene of an Accident. Whiting was given a standard field sobriety Test and Breathalyzer test which revealed a blood alcohol level of .188. Driving under the influence (DUI) is defined as operating a motor vehicle while impaired with a blood alcohol content (BAC) of 0.08% or higher, a chemical substance, or a controlled substance.

Whiting was later transported to the Polk County Jail.