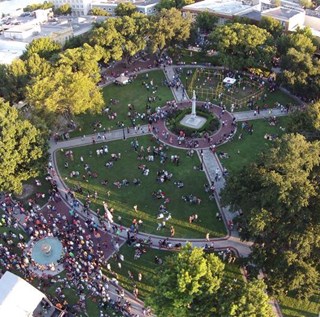 With the discussion about rescheduling the public forum, the City Commission came to the decision to cancel the event. Commissioner Edie Yates made a motion to cancel the event based on feedback the City Commission has already received by local citizens regarding the Monument located in Munn Park. Yates said, “We have heard from our constituents. We all have a very thick stack of correspondence from our citizens on their opinion of what we should do with the monument. We need to make a decision and quit kicking the can down the road.”

The motion passed 5-2 with Commissioner Selvage and Commissioner Malless voting in favor of having a public meeting. A great deal of discussion took place before the vote with input by all Commissioners regarding concerns about interference from special interest groups that have mobilized around the country during similar events. Commission Walker said, “I’m concerned about these groups initiating safety and civility concerns, creating havoc and the possibility of violence.” He added, “When you get heated groups all together in confined space, you are inviting trouble.”

Commissioner Selvage said, “We own this thing and we do need to make a decision.” Commissioner Walker and Commissioner Troller both expressed concerns about special interest groups outweighing local voices during the public forum. Mayor Wiggs said, “We all see the level of involvement by the national groups representing both sides of the issue. We don’t need to invite chaos and create a possible media circus in our community.”

Even though the City Commission asked staff to bring a park master plan to the December 4th meeting, no final decision has been made.  Citizens that would like to share their opinions regarding the proposed Munn Park master plan and the fate of the Confederate Monument are encouraged to contact the Lakeland City Commission through email: CityCommission@lakelandgov.net