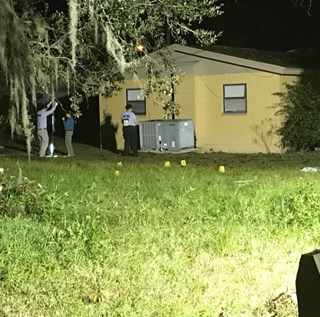 LAKELAND, FL (November 3, 2017) - At approximately 8:43 p.m. Lakeland Police officers responded to 726 W Crescent Drive in response to complaints of a man with a gun yelling racial slurs at neighbors. Neighbors reported that Jerry Roach, age 71, fired a shot in the air and then pointed his gun at them from his front yard.
Multiple officers responded to the area, set up a perimeter, and surrounding residents were evacuated. Officers made continuous requests for Roach to exit his residence, which he refused. Once negotiators were on scene, contact was made with Roach via phone. During the last phone conversation with a negotiator, Roach declared he was coming out and officers would have to kill him. He also made statements that he was bringing his shotgun with him even though numerous requests for him to exit the residence unarmed had been made by negotiators.
Immediately after that at 10:52 p.m., Roach came out of his residence armed with a shotgun and continued to advance toward officers. Officers again gave multiple commands for Roach to drop his weapon and he did not. Six of our officers simultaneously shot Roach.
Officers immediately began performing life-saving measures and Roach was transported to Lakeland Regional Health where he was pronounced deceased at 11:20 p.m. No officers were injured during the incident.
Roach is a convicted felon with a criminal history that includes three felony and two misdemeanor arrests. Due to a felony conviction, he was prohibited to have possession of a firearm.
The following officers were involved in the shooting:
Officer Camilo Almeida, date of hire: 10/12/15
Officer Nick Harrison, date of hire: 10/12/15
Officer Travis Miller, date of hire: 9/15/14
Officer Sean Mulderrig, date of hire: 8/8/16
Officer Raj Patel, date of hire: 3/6/17
Officer John Renew, date of hire: 9/15/14
None of the officers involved were injured.
Consistent with policy, all officers are on routine paid administrative leave pending the investigation. The criminal investigation into the incident will be conducted by the Lakeland Police Department's Violent Crimes Unit and the administrative investigation will be conducted by the Office of Professional Standards, which is standard practice for any officer-involved shooting that occurs inside the City limits. Independent review of the officer involved shooting will also be conducted by the State Attorney’s Office.
Police Department
swanSTATS
takeACTION
recordREQUESTS
openGOV
watchLIVE | onDEMAND
eTRAKiT
getCONNECTED
maps | geoDATA