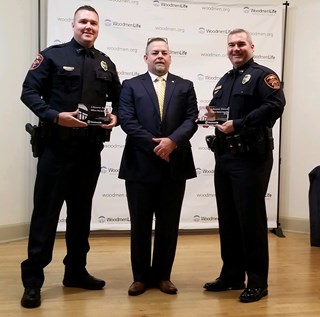 On November 2, 2017, Officer David Guptill was on duty as the Field Training Instructor for Officer Derek Martin. While engaged at a community event at Munn Park, a call was dispatched concerning a suicide attempt at a location on Main Street. Recognizing they were near this incident, Officer Guptill and Officer Martin quickly responded.

On scene, they found an individual lying on the ground, not breathing and with no pulse. Officer Martin quickly jumped into action and began performing CPR while Officer Guptill stabilized the airway of the individual.

Due to the difficulty of the scene in the abandoned building, medical services took several minutes to arrive. During this time, Officer Martin continued CPR on the individual until firefighters and EMS could take over lifesaving efforts.

Upon the arrival of EMS, the individual was intubated and developed a weak pulse. He was subsequently transported to Lakeland Regional Health.

On November 10, 2017, the individual was released from Lakeland Regional Health Medical Center and reunited with his wife.

Due to Officer David Guptill and Officer Derek Martin’s quick actions, we believe they were directly responsible for saving the individual’s life.