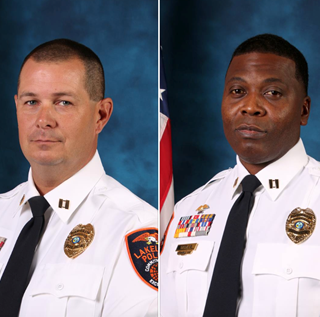 Upon assuming the role of Captain, Ed Cain will oversee the Investigative Services Division which includes the Criminal Investigations and Forensic Services sections and Marvin Tarver will lead the Uniform Patrol Division.

In regards to the promotions, Chief Ruben Garcia said “Both Lieutenant Cain and Lieutenant Tarver have long established themselves as leaders in the department. Both men are steeped in their beliefs and abilities of problem-solving policing which will further the agency’s partnerships with the community and enhance the quality of life in all neighborhoods. The officers under their command and the citizens they serve will all benefit from these appointments as both new captains move our department forward”.

On Wednesday, April 10, 2019, the Lakeland Police Department will host a promotion and swearing-in ceremony. During the event, Chief Garcia will officially promote Lieutenants Cain and Tarver to the rank of Captain; Sergeant Doug Brown to the rank of Lieutenant and Officers Preston Hale and Eric Mathers to the rank of Sergeant. The agency will also swear in new officer John Skillman. The ceremony will begin at 4:00 PM in the City Commission Chambers at City Hall. The public is invited to attend.

Lieutenant Ed Cain
Lieutenant Ed Cain began his career at the Lakeland Police Department as a Reserve Officer in 1991 and then transitioned to a full-time police officer in 1993, working in the Uniform Patrol Division where he also later served as a Field Training Officer. Lieutenant Cain served as a Canine Handler from 1996 along with his partner Alex until his promotion to Sergeant in 2003. He served as a Sergeant in the Uniform Patrol Division, Community Policing Section, Community Services Section, K-9/FTO, and in the Criminal Investigations Section. In 2011 Lt. Cain was promoted to Lieutenant and served in the Uniform Patrol Division until 2013. In 2013 Lt. Cain began his role as the Officer in Charge of the Special Operations Section. In 2015 Lt. Cain transferred to the Criminal Investigations Section where he oversaw the Records Section, Victim Assistance Unit, Property and Evidence Section, Forensic Services Section in addition to the CIS detectives.

In 2011 Lt. Cain was promoted to Lieutenant and served in the Uniform Patrol Division and in 2013 he began his role as the Officer in Charge of the Special Operations Section. In 2015 Lieutenant Cain transferred to the Criminal Investigations Section where he oversaw the Records Section, Victim Assistance Unit, Property and Evidence Section, Forensic Services Section in addition to the CIS detectives.

Lieutenant Marvin Tarver
Lieutenant Marvin Tarver has served in law enforcement for over 25 years and was hired by the Lakeland Police Department in 1996. During his tenure, he has served as a Uniform Patrol Officer, Community Oriented Police Officer, Street Crimes Officer, Special Investigations Detective, Criminal Investigations Detective, Critical Incident Peer Support Member, and as Tactical Entry Operator and Sniper on the Special Weapons and Tactics Team (SWAT). In 2010, Marvin was promoted to Police Sergeant where he supervised officers in the Uniform Patrol Division and was later assigned to the Special Investigations Division where he supervised the Community Response Team (CRT). In 2013, Lieutenant Tarver was promoted to Police Lieutenant. As a Lieutenant, Marvin oversaw the Uniform Patrol Division-Alpha Squad and most recently has managed the Special Investigations Section (SIS) which is primarily responsible for the detection and apprehension of individuals involved in the illegal sale, distribution, and/or possession of controlled substances.

Lieutenant Tarver participated on the first SWAT Roundup Team at Lakeland Police Department to win the International SWAT Roundup Competition held in Orlando, FL. He has also been awarded the Distinguished Service Award and Police Officer of the Year Award by the President’s Roundtable.

Lieutenant Tarver currently holds an A. A. degree in Liberal Arts, a B. S. degree in Criminal Justice from Polk State College and he is a graduate of the Florida Department of Law Enforcement’s (FDLE) Florida Criminal Justice Executive Institute, Senior Leadership Program.