LAKELAND, FL (June 29, 2019) | The City of Lakeland will officially celebrate the opening of the New York Avenue Cycle Track with a ribbon cutting ceremony on Friday, August 2nd at 10:30 a.m.  Those attending will gather in the parking lot at the corner of New York Avenue and Lemon Street. Those attending are encouraged to bring a bike and experience the cycle track for themselves immediately following the ribbon cutting ceremony.

New York Avenue is the first street in Lakeland to be converted from two-way operational use, between Lime and Main streets, to a singular northbound travel lane with an adjacent 8-foot wide bike path with yellow delineator posts separating the north and south travel lanes. A concrete median separates vehicles from cyclists.  Majority funding for the $674,000 project was provided by the Florida Department of Transportation who issued a $530,000 grant toward design and construction costs. Lakeland is recognized as a Bicycle Friendly Community by the League of American Bicyclists.

The League of American Bicyclists now offers the first portion of their Traffic Skills 101 course online for free. Register by visiting http://bikeed.org/courseIntro.aspx and become part of the bicycle-friendly City initiative here in Lakeland, where promoting safe, educated and informed riding is one of our primary objectives. 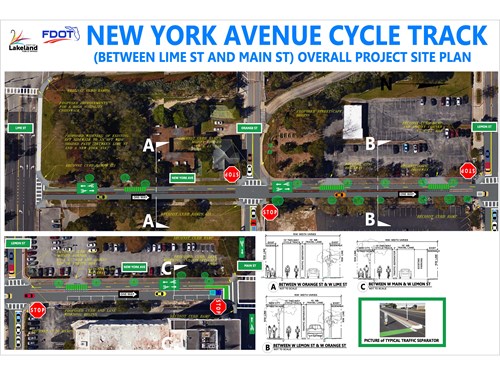