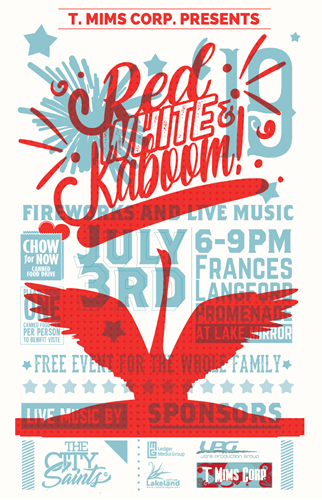 The T.Mims Corp. Red, White & Kaboom Independence Celebration will take place at Lake Mirror along the Frances Langford Promenade on Wednesday, July 3rd from 6:00 p.m. – 9:15 p.m. with The City Saints entertaining the crowd before a dazzling fireworks display launches at 9:00 p.m. This is a FREE event but we are asking that everyone to please bring at least one non-perishable food item that will be donated to Volunteers in Service to the Elderly (VISTE).

Red, White & Kaboom festivities will start with a live concert featuring The City Saints that will certainly command the crowd blending a wide array of pop, country and top-40 hits with their own island vibe. The City Saints play current radio hits as well as yesterday’s best loved classics. Formed in Lakeland, The City Saints are a “Trop-Rock” band that brings the party with them wherever they go. Founding band members Paul Wilson, Nick Herbert and Cliff Brown are no strangers to the entertainment industry sharing the stage with headliners such as The Wailers, Shaggy, Kenny Chesney and many more. The band has a goal at every show to leave people with music that spreads smiles, delivers hope and unites the crowd with happiness. The City Saints will drop their first full length album in September.

Tom Mims, President of T. Mims Corporation said, “We are very excited to sponsor Red, White & Kaboom again this year.  It is an excellent opportunity for our community to come together in celebration of our great country and it is free to the public.”  He added, “However, we ask all those attending to bring a canned food item that will help those in need. All non-perishable items benefit VISTE.”

During Red, White & Kaboom there will be a variety of food trucks around Lake Mirror so bring a blanket, bring your appetite and enjoy the festivities in celebrating our great nation.  Kevin Cook, Director of Communications and one of the organizer of the event said, “We have 10 great food vendors so there is something for everyone. The band is fantastic and you can’t ask for a better setting to watch fireworks over Lake Mirror.” He added, “The watermelon eating contest is back by popular demand with several age categories.  Sign-ups will take place the during the event with the contest happening very close to 7 p.m. at the band’s first break.  This a fun but messy addition that is very popular but rest easy because participants get rain ponchos to protect clothing and we have plenty of paper towels.”

The event always concludes with a dramatic display of fireworks over the lake.  The evening is free to the public and everyone attending is encouraged to bring at least one non-perishable food item to benefit VISTE. Those attending can bring their own cooler but no glass bottles please.  Also, no pop-up tents are large beach umbrellas are allowed.

Snapchat and Facebook geofilters have been created for the event, please use the filter and share your experiences through social media using #redwhiteandkaboom2019 and #RWK2019. All City parking garages will be open for T.Mims Corp. Red, White & Kaboom. For more information go to lakelandgov.net/RWK.