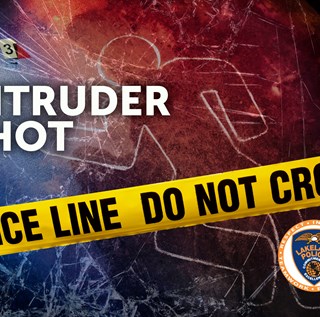 On Sunday, January 28, 2018, shortly after 3:00 a.m., Lakeland Police Officers responded to a residence at 1496 Shorewood Place in reference to an intruder who had been shot. Officers discovered Gabriel Jacobs, age 19, had been shot by homeowner Michael Ives, age 66.
Michael and Charlotte Ives were awoken shortly before 3:00 a.m. after hearing their doorbell ring. Charlotte immediately notified police as Michael attempted to communicate with Jacobs through the closed front door. Jacobs continued to repeatedly ring the doorbell, yell profanities and kick the front door. As Jacobs’ behavior escalated, Michael Ives continuously warned Jacobs that he was armed with a shotgun and to stop. Jacobs ignored the warnings and kicked open the front door. Again, Ives warned Jacobs not to come any closer or he would shoot. Jacobs continued to walk through the doorway, toward Ives and was shot once in the chest.
Emergency medical personnel responded to the scene to perform life-saving measures. Jacobs was conscious and combative with emergency personnel as he was transported to Lakeland Regional Health.
A canvass of the crime scene and surrounding area revealed several traffic signs knocked to the ground and an unoccupied red Chevrolet Impala, belonging to Jacobs’ stepfather, located near the residence. Jacobs’ stepfather confirmed that Gabriel had been in possession of the vehicle. An accident investigation is underway.
At the time of this release, Jacobs remains in critical condition. A charge of Burglary to an Occupied Dwelling is pending upon completion of this investigation.
swanSTATS
takeACTION
recordREQUESTS
openGOV
watchLIVE | onDEMAND
eTRAKiT
getCONNECTED
maps | geoDATA