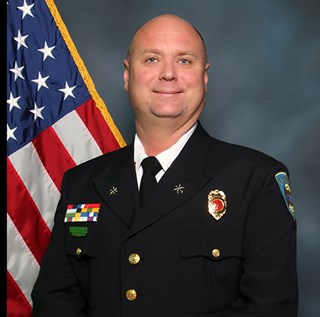 Assistant Chief Williams has more than 24 years of collective public safety experience and has been with the department since 1998. In the role of Assistant Chief, Michael will oversee and provide direction for the Operations Division and is responsible for personnel and emergency responses for the department. These services include: Fire Suppression, Emergency Medical Services, Training, Technical Rescue and Urban Search and Rescue, Aircraft Rescue and Firefighting, and personnel management. His annual salary will be $116,978.00.

In regards to Williams’s selection, Fire Chief Douglas E. Riley says “Mike has served the department well over the years and has worked diligently to prepare for this position. He brings a great deal of knowledge, experience, and leadership to the position. I am proud of his accomplishments and more importantly his unwavering commitment to excellence.”

The appointment came after an internal selection process between two of the department’s Battalion Chiefs, Michael Williams and James Niblack. Fire Chief Riley shares “both candidates have been exceptional contributors and leaders in our organization. It is important to note that Battalion Chief James Niblack has been a respected leader and true public servant at the Lakeland Fire Department. His diligent work, both in the community, and at the department over the past 31 years is very much appreciated and valued; it has been instrumental to our success as a department. The selection was a difficult one to make due to the caliber of both candidates.”

In regards to his appointment as Assistant Chief, Michael says “I am both humbled and honored to have the opportunity to lead the great men and women of LFD. I look forward to serving them and the community in this new role. I will work diligently to ensure the continued delivery of professional and exceptional fire and emergency medical services to the citizenry of Lakeland.”

Michael Williams served as Battalion Chief since January of 2010, prior to this promotion. He served as a Lieutenant prior to his work as a Battalion Chief. Assistant Chief Williams holds several certifications including State Fire Officer, Fire Instructor III, Fire Safety Inspector, Pump Operator, Florida Urban Search and Rescue Operations, and Aircraft Rescue and Firefighting among many others. He is also a certified paramedic. Assistant Chief Williams is a member of the Florida Fire Chiefs' Association. He is also a member of the State of Florida Region 4/6 Incident Management Team, having most recently deployed in response to Hurricane Irma. He earned his associates degree in Emergency Medical Services from Polk State College and a bachelor’s degree in Public Safety from Polk State College. Williams is a graduate of Florida State University’s Certified Public Manager program. He recently graduated from the Florida Fire Chiefs' Association (FFCA) Emergency Services Leadership Institute (ESLI) and was selected to participate in the National Fire Academy’s Executive Fire Officer Program.

More About the Lakeland Fire Department:

The Lakeland Fire Department was established as a career-department in 1916. The Lakeland Fire Department has an Insurance Service Office (ISO) Public Protection Classification 1, the highest achievable rating. The department has seven stations serving approximately 100,000+ people in the City of Lakeland. The department has 171 employees, of which 150 are emergency response personnel. In 2017, the department responded to over 25,500 service calls in its 84 square-mile response area, which includes the city limits as well as portions of unincorporated Lakeland. The department offers a wide range of services which includes heavy rescue, technical rescue, fire prevention, fire code enforcement, fire investigation, aircraft rescue and firefighting, and in-house fleet maintenance; all in addition to outstanding fire suppression and emergency medical response. The Lakeland Fire Department is also passionate about being an active participant in its community and consistently giving back through philanthropic efforts and through nonemergency services like community outreach and preventative public education.