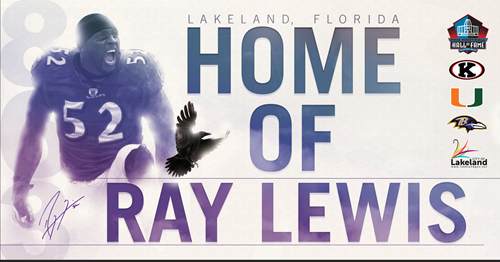 LAKELAND, FL (July 27, 2018) - The City of Lakeland will have the Grand Opening Celebration and Ribbon Cutting for Douglas Cook Park on Saturday, August 25th.  The celebration will start at 11:30 AM with a dedication ceremony that will feature Ray Lewis, Class of 2018 Pro Football Hall of Fame inductee. Lewis among others will cut the ribbon, officially opening the park. Cook Park is located at 955 Wedgewood Estates Boulevard, Lakeland, FL 33809.

Lewis was an All-American linebacker and State Champion wrestler at Kathleen High School before going to the University of Miami where he dominated at middle linebacker for three years before being drafted by the Baltimore Ravens in 1996.  He played at Baltimore for 17 years winning two super bowls. He will be inducted into the Pro Football Hall of Fame as a member of the 2018 Class.

Douglas Cook donated the 18-acre parcel of land south of Carpenter’s Way to the City of Lakeland Parks & Recreation Department as part of the Lake Gibson Village Senior Living Community Project. City Manager Tony Delgado said, “Originally, Lake Gibson Village agreed to lease the sports fields that were part of the Evangel Christian School to the City of Lakeland for $1 per year.  That started a dialogue that grew into something much bigger and now we are excited to open a neighborhood park with a youth sports field in Mr. Cook’s honor.”

Bob Donahay, City of Lakeland Parks & Recreation Director said, “This site is a prime piece of real estate that features a multi-purpose field with permanent lighting, walking path, basketball court, modular playground and a dog park area.  The park also has a building that contains concession opportunities and restrooms, so we can host youth sports leagues.”  He added, “In fact we have youth football playing the day we open the park.”

“This is a win-win and the City of Lakeland is extremely grateful that we have partners like Lake Gibson Village and the Cook Family that care about the well-being of the community, enough to donate park land valued at $2.25 million,” said Delgado. “This park is a much-needed facility the surrounding neighborhood will enjoy and the sports fields will allow us to address the immediate needs of youth sports programs.”

There are a number of activities taking place over the weekend celebrating Lewis being named in the Pro Football Hall of Fame including a Celebrity Golf Tournament at Cleveland Heights Golf Course with proceeds benefitting multiple scholarship funds.  The tournament is August 24th with on-site registration beginning at 7 AM and 8 AM shotgun start.  Celebrity guests include Ed Reed, Gary Sheffield, Warren Sapp, Cecil Fielder and more.  Those interested in playing contact Clinton Glover at 863.838.4031 or clglover51@aol.com.