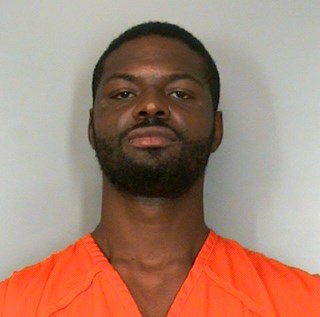 UPDATE: Terrese Lafate Colston, the suspect in a recent carjacking and officer-involved shooting, has been charged with Attempted First Degree Murder of a Law Enforcement Officer, Carjacking with a Firearm, Possession of a Firearm by a Convicted Felon and Violation of Felony Probation. The revolver used by Colston was loaded with 9mm Luger Shotshells, with each round containing hundreds of small metal pellets, much like a shotgun shell. Officer Rethwisch later received treatment at Lakeland Regional Health where it was determined his injuries were not from shrapnel, but from multiple metal pellets hitting him. At least one of the pellets struck Officer Rethwisch between the eyes. Thankfully, his injuries are non-life-threatening and he is recovering.
ORIGINAL PRESS RELEASE (JULY 12, 2018)
LAKELAND, FL (July 12, 2018) - On July 11th at 7:09 p.m., the Lakeland Police Department responded to an armed carjacking at 1330 E. Lemon Street. The victim, Edwin Lemuel Soto stated he was waiting in a cul-de-sac, sitting in his 2000 Mazda 626 waiting on a friend. The suspect approached his vehicle and pointed a handgun at the driver’s window and ordered Soto out of the vehicle. The suspect then got into the Mazda and drove off at a high rate of speed going west on Lemon Street. Soto immediately reported the vehicle as stolen.
At approximately 12:43 a.m., Officer Alexander Rethwisch, while responding to another call, observed a vehicle matching the description of the stolen Mazda taken during the armed carjacking. Officer Rethwisch did a U-turn, to follow the vehicle at which time the stolen Mazda turned onto Interstate Drive and accelerated. Prior to Officer Rethwisch turning on his emergency equipment to initiate a traffic stop, the stolen Mazda hit a curb blowing out the front tires. When the vehicle entered a grass area, the suspect lost control and it came to a final resting point.
The suspect exited the vehicle and fled on foot running westbound. Officer Rethwisch pursued the suspect in his vehicle and on foot. While in foot pursuit, the suspect stopped, turned around with a firearm and fired two shots at Officer Rethwisch. Officer Rethwisch then returned gunfire hitting the suspect once in the left leg. After the suspect fell to the ground, he threw the handgun over a nearby fence.
The suspect, identified as Terrese Lafayte Colston, 28 years old, Tampa, Florida, was taken into custody and officers then administered first aid until emergency medical services arrived.
It is believed Colstons handgun, a revolver, malfunctioned after he fired two rounds. The revolver was found with the barrel damaged and inoperable. It is unknown at this time what caused the barrel obstruction and/or the damage of how many other times Colton would have continued to shoot.
Officer Rethwisch had two minor abrasions, one on his forehead and one on his forearm. It is believed that after Colston fired his revolver, a small piece of shrapnel hit the officer causing the injuries. He was treated by emergency medical professionals at the scene.
Detectives responded to the scene to investigate the shooting. Officer Alexander Rethwisch, has been employed by LPD for three years. Per department policy, the officer has been placed on administrative leave pending an investigation.
Colston remains in custody being treated for his injury and numerous felony charges are forthcoming. The investigation is still ongoing at this time.
swanSTATS
takeACTION
recordREQUESTS
openGOV
watchLIVE | onDEMAND
eTRAKiT
getCONNECTED
maps | geoDATA