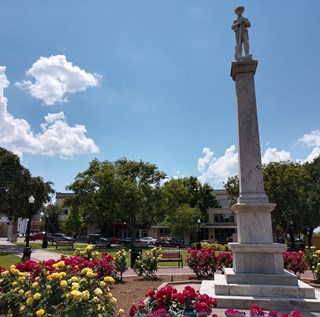 Lakeland, FL (November 20, 2018) | During the Monday, November 19th City Commission Meeting, a decision was made to use red light camera citation revenues to move the Confederate Monument located at Munn Park to Veterans Memorial Park.  The Commission voted 5-2 to revisit an earlier decision made on May 7th that limited funding for the monument relocation to private funds.

When the appropriation was introduced, City Attorney Tim McCausland explained that a supermajority vote would be needed to revisit the issue before the Commission could decide what sources would be used to fund the relocation.  Earlier in the month, the City Commission voted 4-3 during the November 2nd Agenda Study to use red light camera revenues to assist in funding the Confederate Monument relocation.

The City Commission listened to personal stories and opinions on the topic for almost three-hours before voting 5-2 to revisit the May 7th decision and then voted 5-2 to use red light camera citation revenues as a funding source to relocate the Confederate Monument to Veterans Park. In both votes, Commissioner Bill Read and Commissioner Scott Franklin were the dissenting votes.

On May 7th, the City Commission voted unanimously to use private funds to relocate the monument. However, donations have not come in as quickly as some had hoped. To date, a little over $26,000 has been raised from private sources.  During the Monday City Commission meeting, many of those that addressed the Commission stated that they have received red light camera citations and that they would like the revenues to go toward relocating the monument.  Others that have made cash contributions to the cause stated that they do not want a refund and would like their donation to go toward the project.

Also during the Commission meeting, audience members questioned the breakdown of funds for the relocation project.  The original quote regarding the monument relocation is around $150,000 (view here). This quote does not include the cost to rebuild a base for the monument, the estimated $3,500 for security cameras, the cost for fiber connect at Veterans Park and approximately $4,000 for fencing.

All costs are estimates based on a four day removal and relocation. Estimates include security, insurance (if required) Munn Park rehabilitation, Parks & Recreation personnel, traffic assistance, etc.  The current estimate for all elements of the project is $210,000 and includes a $20,000 contingency for any unforeseen costs.

Learn more about the funds raised via GoFundME and via private cash/check donors, monument history and more at the Munn Park Monument Relocation page.