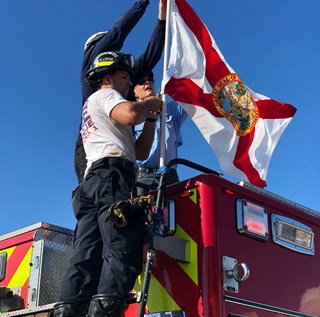 The team was deployed as part of Florida Strike Team 602, based out of Sarasota County. They were first deployed to Panama City, FL where they carried out several search missions for victims and answered emergency calls, including several gas leaks and fires.

The team has since deployed to Mexico Beach, FL where they arrived Saturday, October 13. Mexico Beach is where Hurricane Michael made direct landfall and has caused catastrophic damage. The LFD team is currently in Mexico Beach and serving along with other firefighters from other parts of the state as the area’s emergency responders for general emergency calls, due to the fact that the town’s regular fire department is non-operational and has no available responders. LFD TRT 421 team members are also assisting task forces in the area in performing search and rescue operations.

The team is anticipated to continue this work through the rest of the week.  The LFD team members are safe and in good spirits. The team deployed with Lakeland Fire Department apparatus Heavy Rescue 73 and USAR Truck 421.

Photos of the team and the work they are doing are available at our Facebook page.