LAKELAND, FL (April 9, 2019) | The City of Lakeland will conduct two public meetings to share plans for the proposed roundabout at the intersection of Main Street, Sloan Avenue and Lake Beulah Drive. The two public meetings will be held on Wednesday, April 17, 2019 and Wednesday, April 24, 2019 in the Cafeteria of R.W. Blake Academy located at 510 Hartsell Avenue, Lakeland, Florida 33815. Both meetings will begin at 5:30 p.m. with an open-house format followed by a project presentation at 6:00 p.m. The proposed improvements include converting the signalized intersection into a single lane roundabout with four access points and constructing a Cul-De-Sac at the end of West Lake Beulah Avenue along with additional passive recreational areas. This public meeting is being conducted to give interested persons an opportunity to express their views concerning the location, conceptual design and impacts of the proposed improvements.

Citizens can submit commits in addition to attending the public meeting through postal mail but please note comments must be postmarked no later than May 3, 2019. Comments can also be sent through email and must be directed to D'Ariel.Reed@lakelandgov.net. Public participation is solicited without regard to race, color, national origin, age, sex, religion, disability, or family status.  Persons who require special accommodations under the Americans with Disabilities Act (ADA) or persons who require translation services (free of charge) should contact Ms. Jenny Sykes at 863.834.8444 at least seven days prior to the meeting. 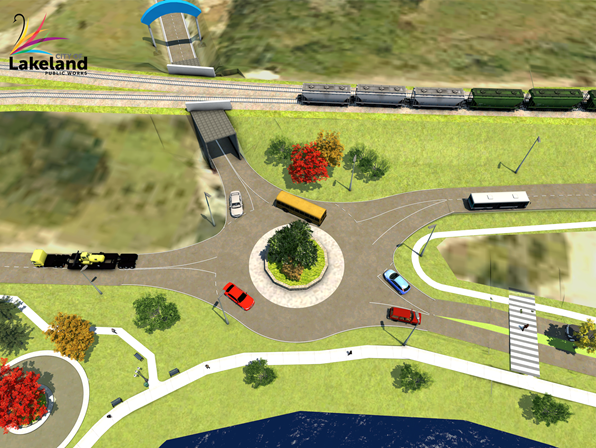