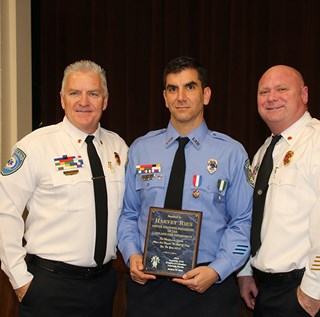 Congratulations to Driver/Engineer Harvey Ries! He is the Lakeland Fire Department's Firefighter of the Year (2019), as recognized by the Lakeland Knights of Columbus.

This is the first of several community awards presented in the first quarter of the year to First Responders in Fire, EMS, and Law Enforcement for performing heroic acts of service, on and off-duty.

Harvey was nominated and subsequently won the award for his heroic efforts during a car accident with multiple patients, while off-duty.

The following narrative describes in better detail what transpired, how Harvey helped, and why he was selected as this years recipient:

On June 6, 2018, Lakeland Fire Department Driver/Engineer and Paramedic, Harvey Ries, came across a serious motor-vehicle accident while off-duty. The incident took place near the corner of Christine Boulevard and South Florida Ave, in unincorporated Lakeland, FL.

The vehicle accident involved two vehicles and effected several children. In total, the severity of the crash led to three pediatric trauma-alerts and one adult trauma-alert which required helicopter transport due to the extent of their injuries.

Harvey Ries is an experienced and highly knowledgeable Paramedic. Upon witnessing the crash, he immediately sprung into action to assist the victims. He began with assessing the pediatric patients in the back seat of one of the involved vehicles. He treated the patients, while medically assessing the extent of their injuries. As an experienced medic, Harvey is no stranger to taking command of an emergency scene to allow for the best care and outcomes for the injured. He directed civilian bystanders, that stopped to assist, and a Polk County Sheriff’s Officer on what to do. He showed them how to hold C-Spine and told them exactly what information to relay to emergency dispatchers so that the right people and equipment would be sent to deal with an accident as severe as this one. He comforted the scared children and the concerned father who could only focus on the condition of his children. He moved from patient to patient in the minutes it took on-duty emergency responders to arrive.

When Polk County Fire Rescue (PCFR) engines, ambulances, and crews arrived, Harvey briefed them on the situation, the status of the patients, and continued helping until the last patient was transported away.

In a commendation letter written by PCFR Battalion Chief, Ken Williams, Chief Williams explains that “because of the report he [Ries] gave to the 9-1-1 operators, I was able to place several helicopters on standby, respond with two more engines and a Heavy Rescue truck. This alone accelerated the time of extricating the victims and flying them to the closest Pediatric Trauma Center. Harvey didn’t stop there, he continued to be a major help with the extrication and rendering medical attention to all patients. Several of the PCFR Captains that responded told me what an asset he was at this scene… I wanted to let the Lakeland Fire Department Administration team know what a tremendous help Harvey Ries was on this scene and to say thank you!”.

The letter sent is what made LFD aware of Harvey’s off-duty actions. Additionally, it serves as a beautiful example of inter-departmental cooperation and the dedication of the first responders of Polk County Fire Rescue and the Lakeland Fire department; both of which are dedicated to helping others above all else, respectively. Harvey Ries, like most of the Lakeland Fire Department’s firefighters is extremely humble. He is in this line of work, not because of self-service, but rather the need and ability to help those that need it most.

The Lakeland Fire Department is proud to recommend Harvey Ries for Firefighter of the Year award consideration. He is a shining example of the caliber of the men and women that serve Lakeland as Firefighters and he lives the department’s creed of duty, honor, integrity, and trust.

This narrative was written based on the accounts from civilian bystanders, a medical narrative provided by Harvey Ries, and a letter of commendation written by Polk County Fire Rescue Battalion Chief Ken Williams.

Thank you to D/E Harvey Ries for his service and courage! And congratulations to all of the other amazing heroes in the Lakeland community, that were honored at the event