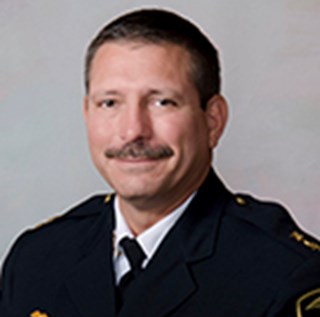 LAKELAND, FL (January 31, 2019) | The City of Lakeland is pleased to announce Ruben Garcia as Chief of Police effective February 1st.  Garcia has 32 years of law enforcement experience with the Lakeland Police Department. He joined the organization April 1987 after serving four years with the 2nd Marine Division of the United States Marine Corps.  Garcia, who has served as one of the agency’s three Assistant Chiefs for the past three years, takes over the Lakeland Police Department with the announced retirement of Larry Giddens.

City Manager Tony Delgado said, “I am honored to promote Assistant Chief Ruben Garcia to the position of Chief of Police.  Chief Garcia has an esteemed career with the Department and has proven to be highly skilled, extremely knowledgeable and deeply involved with the men and women of our decorated Department.”  He added, “He is equally understanding of our diverse community and has proven his commitment to work hand-in-hand with all residents and businesses within our community.  His commitment to community policing is greatly shared by the City Commission. This is an area he will continue to focus on and it will be the foundation of his administration going forward.”

Garcia said, “I’m extremely honored to continue to serve the City of Lakeland, its citizens and the members of the Lakeland Police Department as we continue to work in partnership to safeguard our neighborhoods and improve the quality of life for our citizens and visitors alike. The Lakeland Police Department has been blessed with strong support from our community, our City government and our many county, state, and federal partners. Through accountability, urgency and transparency in our actions, we will continue to earn such support every day.”

Garcia is scheduled to be sworn in as the new Lakeland Chief of Police on Friday, February 1st at 8 a.m. in City Manager Tony Delgado’s Office.  An official swearing-in ceremony will be announced at a later date.  Delgado said, “We have been blessed to have Chief Larry Giddens at the helm for the past five years and his ability to bring the Department and the community together has been the hallmark of his administration. He has built a great succession plan within our organization and that made my decision extremely difficult considering our internal candidates.  However, I believe Chief Garcia will carry that legacy and raise the bar as we continue to move the Department forward.”