LAKELAND, FL (July 25, 2019) | City of Lakeland crews will start an emergency sewer repair located behind 817 Carleton Street over the weekend. The sewer line is located behind the property adjacent to Three Parks Trail. The repair will impact the portion of Three Parks Trail between the Dog Leg Woods Dog Park parking lot and Buckingham Avenue.

Richard Ruede, Manager of Waste Water Collection said, “We have a break in the 24-inch sewer line which handles approximately five-million gallons of wastewater a day.  In order to make the repair we will be shutting down the northbound lanes of Cleveland Heights Boulevard and turning the southbound lanes into two-way traffic.  It’s unfortunate but this has to be done in order to bypass the original sewer line to make the repairs.”  He added, “A small portion of Three Parks Trail will also be shut down because there will be a lot of activity and heavy equipment in operation.”  Crews will work over the weekend setting up the bypass pipe so the break can be repaired. The bypass is expected to be completed by Monday. This will allow crews to make the repair to the 24-inch sewer line on Tuesday and then dismantle the sewer bypass on Wednesday. 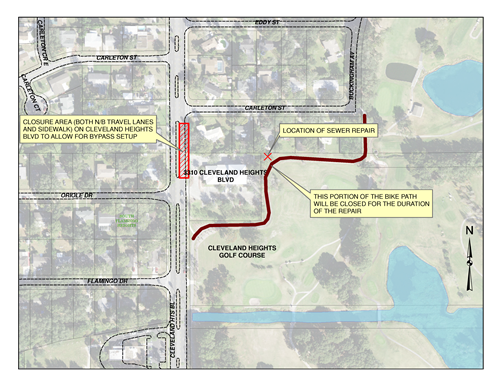