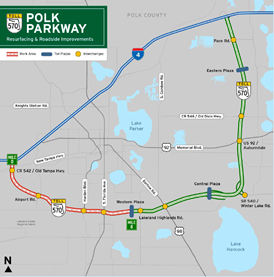 LAKELAND, FL (March 5, 2020) | Florida’s Turnpike Enterprise has begun a resurfacing and roadside improvement project along the Polk Parkway/SR 570.  The project consists of resurfacing an eight-mile segment of the Polk Parkway from Interstate 4 to the Western Toll Plaza (between Lakeland Highlands and Florida Avenue exits).

This project will resurface an eight-mile section of Polk Parkway (see attached map) as well as replace bridge joints, install guardrails and make improvements to signals, lighting, signage, drainage and pavement markings. Nearby residents and businesses may experience periodic construction noise, vibration and possibly some dust during the construction project.

Travel lane closures and detours will take place during off-peak hours to minimize traffic congestion and delays for most drivers.  Closures will be announced in advance through Florida’s Turnpike Central and West Central Florida Weekly Lane Closures and Work Zone Advisory (floridasturnpike.com/construction.html).

The Florida Department of Transportation reports that the project cost is approximately $13.5 million and is scheduled to be completed in the Spring of 2021.