LAKELAND, FL (November 18, 2020) | On Sunday, November 22nd at 7 a.m. the City of Lakeland’s Waste Water Collection Division will have a contractor on-scene to repair a roadway depression caused by groundwater infiltration into a sewer manhole (see map). In order to complete this repair, the northbound lanes of South Lake Parker Avenue will need to be closed between East Lime Street and East Orange Street. Traffic on South Lake Parker Avenue will be reduced to one lane in each direction and both directions of travel will be shifted to the southbound lanes.  Vehicles will be diverted back to normal traffic operations once past the construction zone.  It is anticipated that the work will take all day on Sunday, November 22nd. 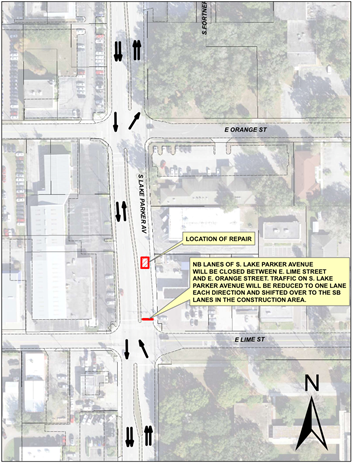