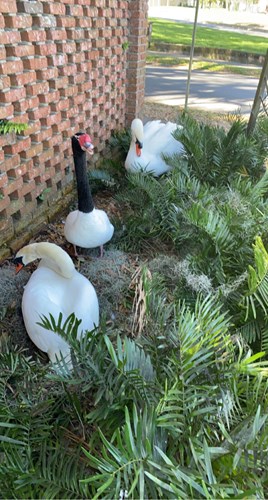 LAKELAND, FL (March 1, 2021) | Swan Nesting Season is upon us in Lakeland, and we have a very rare occurrence on Lake Morton. The lone male Black Neck Swan that lost his mate during nesting season last year has wooed a new mate. This is very rare among swans to not only find a new mate, but also couple with a bird that is not the exact same species.  Our Black Neck Swan is in the nest-building process with a White Mute Swan. Unfortunately, they have built a nest in the exact same spot where his previous mate was killed, located across the street from the lake at the corner of South Boulevard and Lake Morton Drive.  We want to remind those travelling around Lake Morton to pay close attention to the posted 20 mph speed limit and to be vigilant.

There will be posted signage and display boards notifying motorists that it is swan nesting season and to pay attention.  Steve Platt, Grounds Maintenance Supervisor for the City’s Parks & Recreation Department said, “Many of the Lake Morton swans move into the South Lake Morton neighborhood to nest.  The swans do this to find unused nesting locations with shrubs and other features that they use as cover.”  Platt is also known locally as the Swanfather because he and his crew have been caring for Lakeland’s iconic swans for decades.  Platt added,  “The swans nesting in the neighborhood have to waddle their way to the lake for water and food so this makes them very vulnerable when travelling across the busy roadway.  Once a female swan lays its eggs, it is roughly a 40-day time period before the eggs start to hatch. So, it's back and forth to the nest and to the lake for at least 40-days.”

Lakeland’s current swan population has ties to Queen Elizabeth’s Royal Flock. In the early 1950s, a Lakeland resident residing in England wrote a letter to the Queen of England asking her highness if she would be so kind and donate a pair of swans to the City of Lakeland. Queen Elizabeth II replied to the request sending notice that two royal swans from her flock would be donated to the Lakeland community. The birds arrived in Lakeland on February 7, 1957, and were safely placed on Lake Morton.  The rest is history.