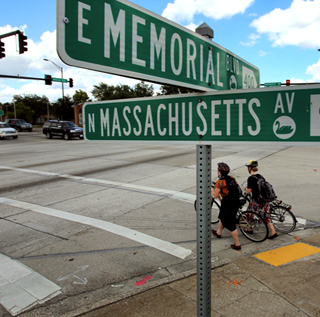 LAKELAND, FL (April 6, 2022) | The City of Lakeland was recently awarded a $500,000 grant from the Florida Department of Transportation (FDOT) to expand the Intersection Avoidance Safety Program (ICASP) to include 25 additional high-impact intersections.  The system has sensors that measure the speed of a vehicle and its distance from the intersection. It then predicts whether the driver is going to run the red light or be clear of the intersection in time.

If someone tries to run a red light, the sensors alert the signal controller to extend an all-red phase - where all directions of traffic see a red light. The all-red phase typically lasts two to four seconds and this forces everyone approaching the intersection to stop, thereby avoiding a near miss or crash.

The system captures the motorist at points in the road through electronic sensors.  Using artificial intelligence, the system evaluates this information and will extend the signal to all-red if a vehicle is on pace to run the red light. Normally an intersection is all-red for one second, but it could be extended by up to four seconds if needed to avoid a collision.

The City of Lakeland currently has four intersections that have the ICASP system in place.

These intersections were originally chosen because of the high number of accidents attributed to red light running as part of the red light camera program.

The expansion of the ICASP program will include an additional 25 intersections and the exploration of a driver warning system that would use cell phone or in-vehicle technology to alert drivers of a red light runner at one of these intersections.  The state envisions the capability to send a text message or warning through navigation apps, but the technology is not readily available today.  Jeffrey Weatherford, Manager of Traffic Operations said, “This is an enhancement to the original program that has exciting possibilities.”

The City of Lakeland and FDOT will review possible locations for the ICASP expansion. Weatherford said, “Per the contract, we will sit down with FDOT and determine future locations that will most likely be a mix of FDOT corridors such as Florida Avenue and City only corridors such as Edgewood Drive or Cleveland Heights Boulevard.  Intersections that have the ICASP system installed may or may not have red light cameras in place.  Although, red light camera intersections have an established benchmark, making these locations likely candidates.”  When asked about the ICASP system currently in place Weatherford said, “What I can tell you is that on March 4th, 45 eastbound vehicles ran the red light (almost 2 per hour) at Memorial Boulevard and MLK Avenue and we didn’t have a single red-light running crash there.”