LAKELAND, FL (November 2, 2022) | On Saturday, November 12th at 10 a.m. there will be a ceremony unveiling the Spanish-American War Monument at Veterans Park located at 701 West Lime Street.  Veterans Day is observed annually on November 11th, the anniversary of the end of WWI. On this day we honor the men and women who have served in the U.S. armed forces. The Veterans Day Parade will step off immediately following the ceremony. The parade will leave the RP Funding Center at 11 a.m. and travel down Lemon Street to downtown Lakeland, turning left on Kentucky Avenue, and ending at Munn Park.

Lakeland was a staging area for troops en route to Cuba during the summer of 1898 in preparation for the Spanish-American War.  The town was chosen as an overflow site for Tampa, 30 miles to the west, because of its good rail connections and reliable water supply from area lakes. Five Regiments were stationed in the town:  2nd Massachusetts Volunteer Infantry and the 71st New York Volunteer Infantry at Lake Morton, 1stUS Cavalary and 3rd Ohio Volunteer Cavalry at Lake Hunter,  and the 10th US Cavalry at Lake Wire (Buffalo Soldiers). This monument pays tribute to those soldiers, many of whom later embarked to Cuba and served their country with honor.  This project has been a collaboration among the City of Lakeland, Polk County Veterans Council, and Platform Art, Inc.

Platform Art commissioned artist Becky Ault to produce the memorial that honors the veterans of the Spanish-American War and the legendary Buffalo Soldiers.  The piece entitled Friends of Freedom recently arrived in Lakeland from Pennsylvania after being escorted by various Buffalo Soldier Motorcycle Chapters along the way.

The Polk County Veterans Council is hosting the Lakeland Veteran’s Day Parade that takes place immediately following the unveiling of the Friends of Freedom Memorial. The parade honors all veterans. The Veteran’s Day Parade will step off from the RP Funding Center right at 11 a.m. and travel east along Lemon Street into downtown Lakeland. The parade will then turn north on Kentucky Avenue and end in the Munn Park parking lot. The parade will feature veteran groups, JROTC Units, Sea Cadets, CAP Cadets, Boy Scouts, Cub Scouts, Marching Bands, and other entries.

Gary Clark, Chairman of the Polk County Veteran’s Council said, “It is with great pleasure that we honor our veterans during this special day.” He added, “I hope that we line the downtown streets and show our veterans just how much we appreciate their service to our country.” 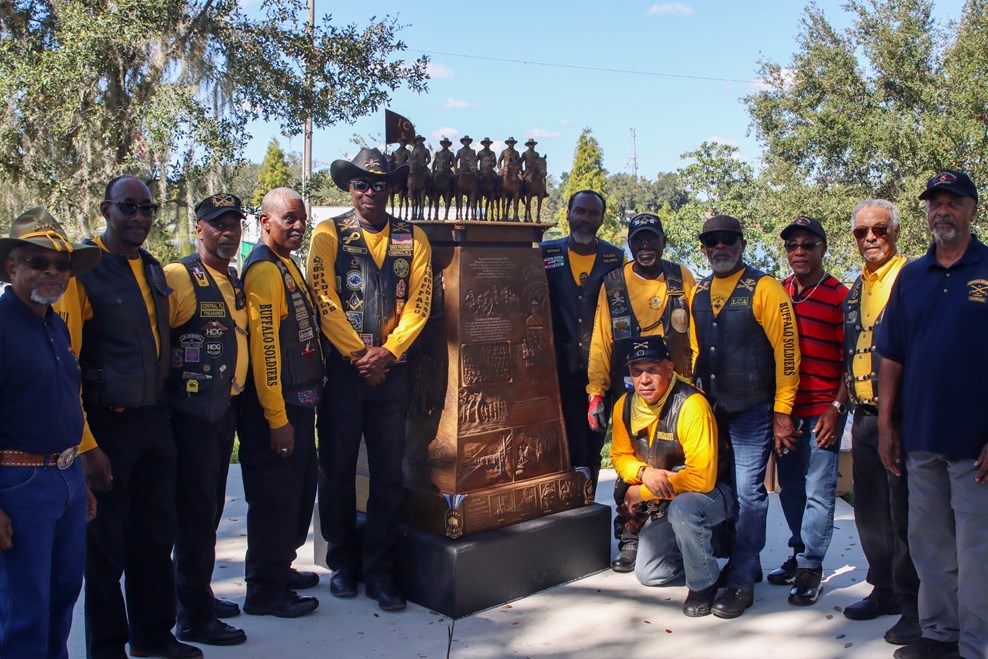