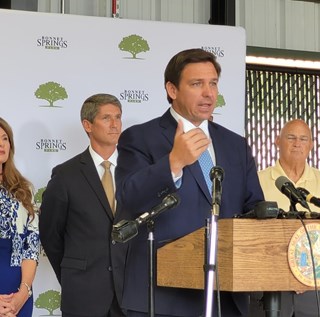 LAKELAND, FL (April 16, 2021) | Governor Ron DeSantis made a visit to the City of Lakeland to announce the award of a $42.9 million grant for a multi-component project in partnership with Bonnet Springs Park. The City of Lakeland, in partnership with Bonnet Springs Park (a non-profit organization), applied to the Department of Economic Opportunity for a grant in the amount of $52 million to address flood hazard risks within the Lake Bonnet drainage basin.  The grant and project implementation will be completed by Lakes & Stormwater, a division within the Public Works Department.  The project will be initiated over the next several months and the overall project is expected to be completed over a 10-year period.

DeSantis said, “This project will provide social benefits to a community that sits in a county with one of the nation’s highest suburban poverty rates. The project will focus on mitigation efforts that will add flood storage capacity to the drainage base and the project will include improvements to stormwater infrastructure and watershed resilience.”  He added, “We think that this mitigation is important for safety. It’s important for shelter, transportation, and combatting hazardous materials during severe weather.”

The Florida Department of Economic Opportunity administered the grant as part of the Rebuild Florida Mitigation Infrastructure Program.  Grants were awarded to complete large-scale infrastructure projects that would help mitigate risks from natural disasters including severe flooding and hurricanes.

Laurie Smith, Manager of Lakes & Stormwater said, “We are extremely excited and grateful to the Department of Economic Opportunity for the award of this grant which will allow us to focus on flood control and hazard mitigation in one of our more vulnerable drainage basins within the City.  The area surrounding Lake Bonnet was mostly developed during a period before stormwater control regulations were in place, therefore the drainage systems within these communities are undersized and unable to appropriately convey stormwater runoff.” 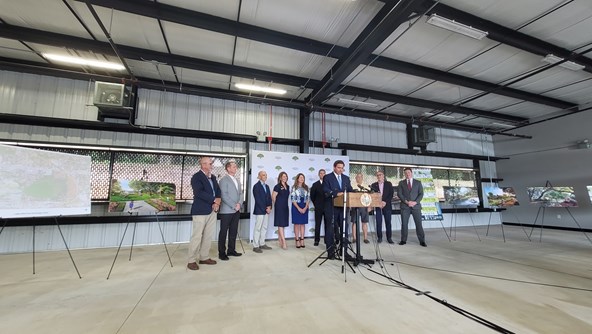 The project will include:

Smith said, “Some of the physical elements that will be part of the project include the dredging accumulated sediment from Lake Bonnet to allow for lowering the operational level of the lake to better accommodate inflow from upstream areas, increase retention volume and time, and decrease the amount of downstream flow into flood-prone areas during severe storm events. There will also be improvements to the drainage system downstream of Lake Bonnet through a combination of engineered projects designed to provide flood protection. These improvements will increase stormwater conveyance, capacity, and storage.”