LAKELAND, FL (June 4, 2020) | The organizers for Black Lives Matter Polk have successfully submitted an event request form with the City of Lakeland to hold a protest march on Sunday, June 7th starting at 2:30 p.m. The march will start at Lakewood Terrace Apartments on 14th Street and will ultimately end at Munn Park, traveling approximately three miles to the final destination.  Another group will start at Webster Park, 1255 Webster Avenue, and join the protest march at 10th Street.

The organizers state that the event is scheduled to start at 2:30 p.m. and end at 7:30 p.m. Based on the route, traffic will be impacted as participants travel along City streets toward Munn Park.  The Lakeland Police Department will be providing traffic control and security along the route to ensure a safe environment for the participants and motorists in the area. Motorists are encouraged to avoid the area if at all possible to help lessen traffic impacts. 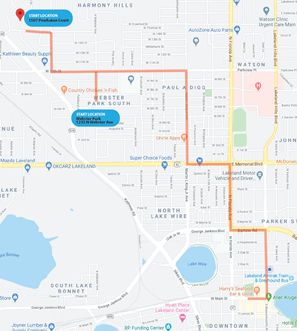