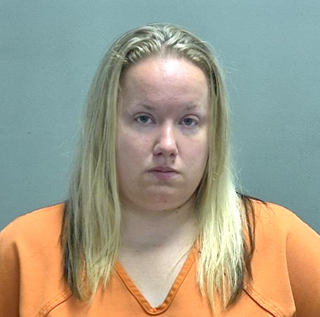 LAKELAND, FL (August 12, 2021) - Detectives with the Lakeland Police Department’s Special Victim’s Unit, with the assistance of the Columbia City Police Department in Indiana, have arrested 35-year-old Tabitha Palmer, related to criminal acts involving a minor in Lakeland whom she met online while playing video games.
On June 9, 2021, the parent of the victim, an 11-year-old boy, reported finding inappropriate content of a sexual nature on her son’s tablet. Upon interviewing the victim and a forensic review of his tablet, detectives discovered evidence of an inappropriate online relationship that developed between Palmer and the victim over the course of approximately seven to eight months. Initially, Palmer and the victim met and communicated while playing the online video game Fortnite. In May of this year, Palmer began communicating with the victim on the communications platform Discord, and the context of the messages became increasingly sexual in nature. Over the period of one month, Palmer and the victim exchanged approximately 14,300 messages through the Discord platform. Detectives found a noticeable progression in the sexual nature of messages between Palmer and the victim. Palmer gradually exposed the victim to explicit photographs and conversations, eventually encouraging him to engage in similar behavior.
Upon review of the evidence uncovered, detectives were able to confirm the identity of Palmer and her location. Detectives Cory Lawson and Alex Urra, with the Lakeland Police Department’s Special Victim’s Unit, sought and received a warrant for Palmer’s arrest on August 2, 2021. The detectives traveled to Columbia City, Indiana, and with the assistance of the Columbia City Police Department, Palmer was arrested on August 5, 2021. In an interview post-Miranda, Palmer admitted sending lewd images of herself and soliciting indecent images from the victim. Palmer also admitted to sending lewd images to at least three additional juveniles, all of whom are believed to be between 12 and 14 years of age. Investigators are continuing to work to identify the three minors; however, all are believed to reside outside Florida.
Chief Ruben Garcia said, "Thankfully, this child's parent was vigilant in reviewing the electronic device he was using and reported the illegal content immediately. It is crucial for parents to monitor their child's digital activity because you never know who is communicating with your child online. We are grateful for the outstanding work of the detectives in this case and the many other efforts the Special Victim’s Unit engages in to safeguard our most vulnerable citizens from those who would prey on them.
Tabitha Palmer was charged with (9) counts of Distribution of Harmful Material to a minor [847.0138], (1) count of Computer Pornography; prohibited usage to Seduce, Solicit, Lure or Entice [847.0135 (3)(a)], and (1) count of Unlawful Use of a Two-Way Communication [934.215]. All of the charges are third-degree felonies. Palmer is currently being held at the Whitely County Jail in Columbia City, Indiana, without bond awaiting extradition to Polk County.
swanSTATS
takeACTION
recordREQUESTS
openGOV
watchLIVE | onDEMAND
eTRAKiT
getCONNECTED
maps | geoDATA