House Will Be Moved on Sunday, June 20th

UPDATE: The moving company out of Jacksonville, Florida that was contracted to move a historic home in Lakeland from 721 E. Orange Street to 711 E. Lime Street on Sunday, June 13th has experienced an unexpected delay that will force the house relocation to be rescheduled one week later. The move is now scheduled for Sunday, June 20th.

LAKELAND, FL (May 28, 2021) | On Sunday, June 13th June 20th a historic home located at 721 E. Orange Street will be moved to 711 E. Lime Street.  It is estimated to take approximately one hour to move the house less than one mile along the planned route but there is a great deal of preparation that goes into moving a structure.  Roads along the route will close at 6 a.m. on the morning of the move and will re-open by 12 p.m.  This is not a City project. A private citizen is paying to move the structure to a parcel they own. 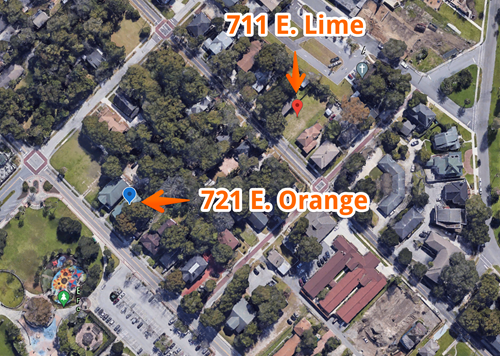 The house will be moved by a professional moving company out of Jacksonville, Florida. This is the same company that moved the 1927 Tudor House to what is now Cob & Pen located at 1221 South Florida Avenue. The transport company will arrive in Lakeland one week before the move to prep the house for relocation. The roof of the house will be removed along with the front porch and a small side addition to better accommodate transport on City streets.

Once the house is at the new location (711 E. Lime Street), it will be placed on elevated blocks until footers and a foundation are prepared.  Directly after the move, the roof will be quickly reassembled so that the house is protected from the elements. According to the moving company, the portion of the house that will be moved is approximately 15’ tall, measures about 29’ X 45’, and weighs an estimated 40,000 lbs.