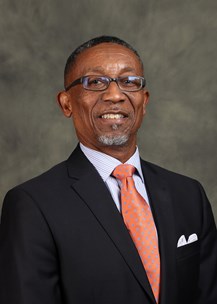 TALLAHASSEE, FL (August 17, 2020) | The Florida League of Cities, the united voice for Florida’s municipal governments, today announced the election of its officers for the 2020-2021 term. The officers were elected and installed during the association’s annual business meeting held virtually this afternoon.

City of Orlando Commissioner Antonio “Tony” Ortiz was elected president of the Florida League of Cities, comprised of 411 municipalities in the state. Commissioner Ortiz will serve a one-year term. During his inaugural address, he announced his presidential priority for the coming year, “Building Stronger Cities: Organizing, Empowering & Delivering.”

“Knowledge is not just power. Knowledge changes paths, creates vision and opportunities, transcends limitations, saves lives and promotes integrity. Knowledge is the foundation with which, as the new president of the Florida League of Cities, I intend to pave the way for our state to Build Stronger Cities,” said Ortiz. “This is the year for every resident of the state of Florida to learn the ways of government. It is time to develop a new generation of well-informed Floridians, that will know exactly what to expect from our legislators, that will hold them accountable, and keep them committed to the needs of the community. This is the year to bring the power of government back to the people.”

The “Building Stronger Cities” initiative will include engaging workshops, videos, a dedicated website for residents, printable and digital materials available in multiple languages and more.

Ortiz will join an impressive list of Florida leaders serving as officers with the Florida League of Cities for the 2020-21 term including:

Ortiz has been a dedicated public servant most of his life, beginning with his enlistment into the United States Marine Corps in 1984. He was first elected to the Orlando City Commission in 2008. Since his election, Ortiz has been involved in various successful projects and programs including, opening the first Seniors vs. Crime Office in Orlando, organizing the community through the creation of neighborhood and business councils, developing the main gate to the city from the Orlando International Airport,  the creation of the Central Florida Public Service Career & College Readiness Program in Orange County, the creation of a government academy, and championing the efforts that led to the implementation of the City of Orlando Trust Act policy, among others. He has also served on the Board of Directors for the Florida League of Cities, has been a member of several of the League’s legislative policy committees, is the president of the Tri-County League of Cities, sits on numerous local boards and has been a member of several local organizations. Before his election to the city council, Ortiz was also an officer with the Orlando Police Department for 14 years.

Phillip Walker graduated from Kathleen High School and has a Master's Degree in Criminal Justice from Rollins College. Prior to his retirement as owner and agency principal of a Lakeland Allstate Insurance agency for over 26 years, Mr. Walker was a Lakeland Police Officer. He presently serves on the Advisory Board for the Salvation Army, the Board of Directors for Chapters Health System, Christ Community Christian Center Church, the Board of Trustees for McKeel Schools of Technology and is a member of other organizations. He is also Founder and Board Member of the Lakeland/Polk County Chapter of Alpha Phi Alpha Fraternity, Inc. In 2015 he was inducted into the Kathleen High School Hall of Fame.

Mr. Walker is married to Cappie D. Cooke and they have three children, Janelle, Jaela, and Christian Phillip, and one granddaughter, Zoë. There are also two other young men who are a part of his immediate family, Tony and John Eric.